The mystery behind Flaming Waters

Deceitful peace between the rivers of Fire

The oldest and the most diverse lands in the Spellfire world are the ones to the West. History Keeper notes that in the far, far West lives the oldest human known to him. Nobody even knows how old is he as the age here is counted in decades, not years. He lives on a gigantic remote island that differs from the remaining Spellfire world. Nobody knows his name and most try to avoid the island. He is known as the Mad Scientist.

The Mad Scientist lives in a Glass Pyramid which, for some reason, is much stronger than stone. The pyramid also functions as a laboratory where he has been conducting various experiments for centuries. Legends say that one experiment went really wrong. Some chemical reaction came up with a loud explosion and a massive mushroom-shaped dust cloud. The experiment left a huge crater near the lab. The mushroom cloud was so big that it was seen even from the Elven lands that are thousands of miles away. Natives are much more afraid of the Mad Scientist than they are scared of the Dark Wizard - even thinking of him makes their blood run cold.

According to another legend, many kings have tried to conquer the island but failed. As soon as they approached the shores of the island, the water started to burn with the flames as high as the mountains. Because of this strange magic and flammable water, these lands are called Flaming Waters.

The Mad Scientist is not the only one who lives on this island. There is a tower that belongs to a well-known Alchemistress there. It is believed that she can make very powerful weapons out of nothing and any item or an artifact can become much stronger in her hands.

Islands are also inhabited by artificially-created creatures called Golems. They have their own Kingdom on the island.

There used to be several cities in the islands, but, after the failed experiment, only the bravest souls live there. One is a Forgotten one. Another is called an Experimental town. This is where extraordinary and horrid creatures, mutated races live and participate in various experiments of the Mad Scientist and the dangerous Alchemistress. 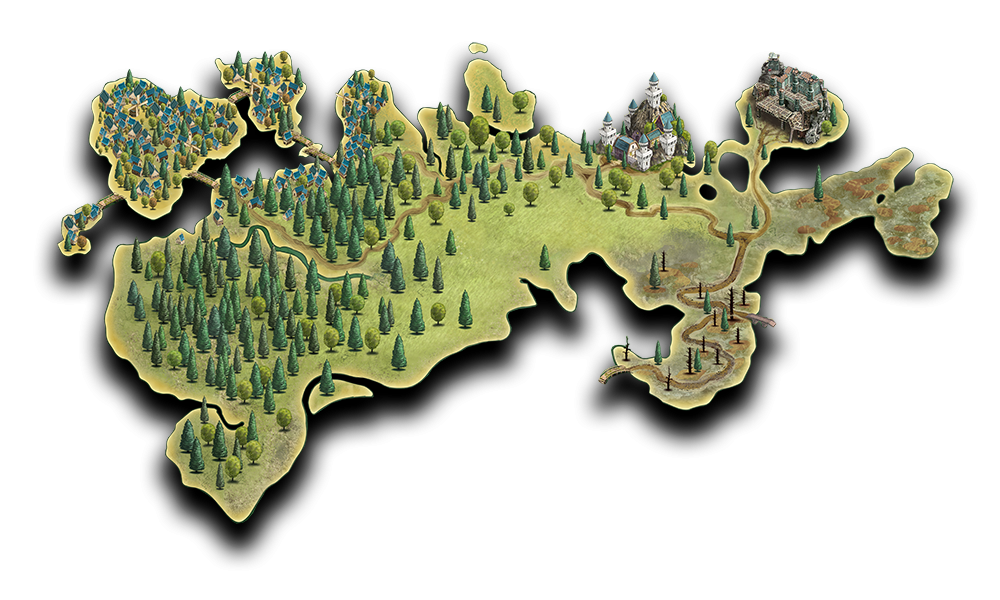 Flaming Waters lands are called the most diverse ones because of many different races that all live in a deceptive peace together. The Haunted Forest there is guarded by the Eye of Shadows which tracks and notices every little movement of anyone who dares to approach. This forest is populated by the werebeasts, orcs, trolls, and vampires. Orcs live in the underground and no one even knows how big is their kingdom because you can see only small villages above the ground with the entrances to the huge underground Orc Dungeons.

Flaming Waters have also become the motherland of the Elves. They live near the enormous Elven Forest where many towns and villages merged together into one huge Elven Metropolis. Elves live in harmony with nature. There are several sub-races of the elves. The purest and powerful ones are called High-elves. They are the most advanced in magic and technology and are the protectors of the elven race. The ones who are more close to the human race are called Half-elves. Humans and Elves have been living together for ages. Races have blended together and their descendants inherited the best traits from both races.

These Elven lands are ruled by Elven King. Rumors say that he is not even an elf, he only disguises itself as an elf. Some saw him flying faster than wind, some saw his wings bigger than the dragon's, some say that his bow shoots the lightning. Elven King lives in his own castle and protects the Flaming Waters from the encounters of the North.

In the Flaming Waters, you can learn Black and White Magic. Both schools are on the small island near Magic Lake. Lands are full of various altars, hidden ruins, shrines, and mysterious places.

Dear Wanderer, if you think that these diverse lands ruled by a few very powerful beings fascinate you the most, try to apply for citizenship here and see if the experiments of the Mad Scientist will make you a hero, or a slave.