The last stand of the Dead in Holy Deadlands

The Story of the coldest part of Spellfire Game

Lands to the East used to be the darkest place in the Spellfire world. Sun was a rare occurrence there, nature was on the verge of extinction. Animals and all living beings abandoned East lands as it was too hard to live without sunlight and nature around. Slowly but surely, everything was dying.

Yet, chaos has its own beauty. This place has become a perfect residence for lifeless creatures from the darkness, like zombies, skeletons, beasts, and lost souls. Rules of the Dark were impossible to understand for the conscious ones. The stronger, the more fearless or brutal you were, the more power you had.

However, even in the darkest world, the most beautiful flower can grow. That's what happened with these lands. When the last hope was lost, a mysterious stranger came to restore the balance. 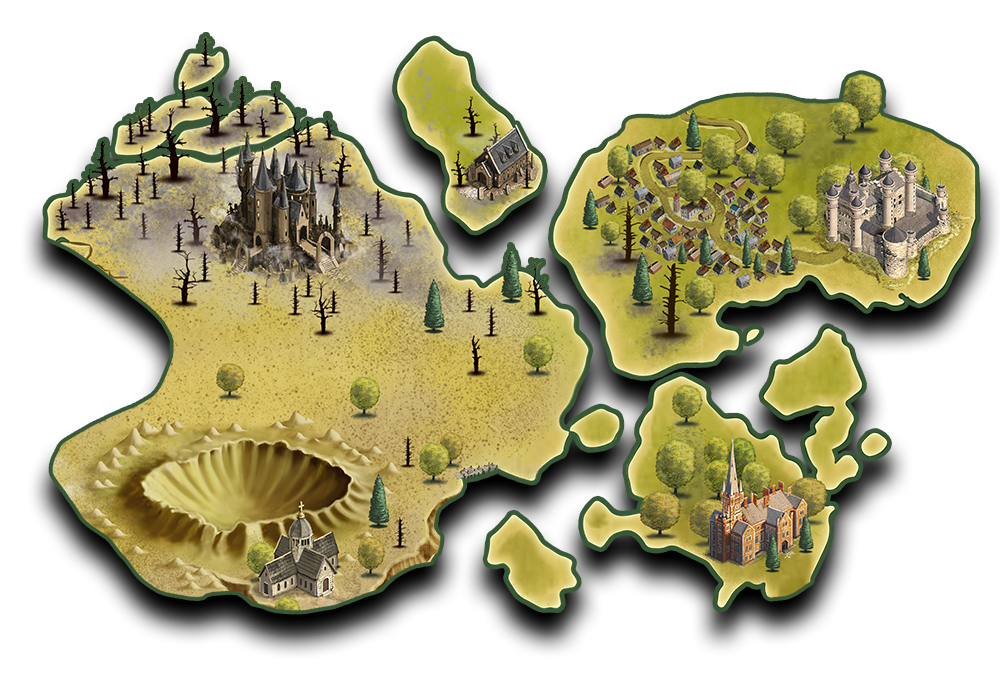 There are strange stories whispered from generation to generation about the newcomer.

Some say that a kid grew up in these lands and was trained by the Dark Wizard of the West Coast to be the leader of the dead. One day, he got struck by lightning, survived, but changed. At the time, he was a very powerful wizard who knew the darkest secrets of the Dead world. After the accident, it seemed like a bright light started to shine inside him and he decided to serve for the Light.

According to others, the stranger was brought to the world by the Brotherhood of the Light who took him from the world of Death to bring the light into the mysterious and deadly lands.

Maybe they are all right. Maybe these are only rumors. The only thing known for sure is that this stranger changed these lands. Trees started to grow back, animals, birds, and insects came back and started to multiply. Many races of living beings came there to build cities, holy places and pushed the darkness away. The balance in these lands was restored.

Many argue about the story and who the guy really was, but most agree that this was the divine intervention. They entitled their lands as Holy Deadlands.

Holy Deadlands are really interesting, yet dangerous to explore. Here, you can find a strange crater called the Dragon Nest. No one knows why it is called like that because nobody saw any dragons there. There is also an impenetrable Dragon desert that lays next to the Malignant Sea. Living beings can't touch the water as it is known to be a deadly poison. At least for now everything is changing for the better in these lands and nature is taking back what was lost for ages with the help of light.

In Holy Deadlands, you can enjoy yourself in a quiet Amazonian forest and be scared by the horrific Holy Dead forest near the Dark Wizard Castle. There is also a huge Undead forest filled with ghosts, lost souls, and undead creatures. In this forest, there are The Undead Keep and the Ghost Fort which are really hard to reach for the living beings.

The exceptional city called Exiled city is located to the south of the Dragon desert. This city is floating above the ground and waiting to adopt everyone who lost their homes because of wars or terror. Here you can find a completely isolated, remote, independent, and beautiful ecosystem in the Spellfire world.

If you want to start learning magic - the Holy Deadlands is the right place. You can enter an elementary school located in the Magic forest where you can learn basics of the Air, Water, Earth, Fire, and Ether magic. The advanced may study at Ether Magic and the Necromancy schools.

When the balance was restored, two castles were built: the Castle of Lies and the Castle of Truth. You can select the path which is right for you. The city of Justice and the Cult of Truthseekers were established to achieve the balance between right and wrong. Next to them, there is a living magma crater called Purgatory, where justice can be served for those, who do not obey the rules of the balance.

Dearest wanderer, if you think that Holy Deadlands is the most interesting place for you to explore, please take your time to apply for citizenship here and get yourself permission to live in these fascinating but also dreadful lands.